One Million Followers: How I Built A Massive Social Following In 30 Days

Home » Book Review » One Million Followers: How I Built A Massive Social Following In 30 Days 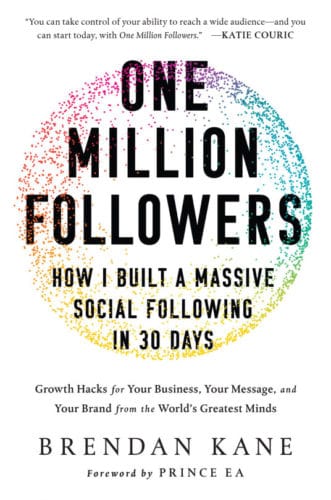 Looking to build a massive social following in just a short period of time? I’m sure we’d all like to. That’s what Brendan Kane offers to show you how to do in his new book, One Million Followers: How I Built A Massive Social Following In 30 Days, but he does it in the completely wrong way.

There’s a right and wrong way to build a social following. While the wrong way may allow you to build that following quickly, what you’ll end up with is pure garbage that wasn’t worth the effort. Sadly, that’s the route presented in One Million Followers: How I Built A Massive Social Following In 30 Days.

Kane outlines how he went about building more than 1 million followers on Facebook with ease. It basically breaks down to two tactics.

First, he posted a bunch of worthless happiness quotes photos. You know, the type your aunt and her friends absolutely love to share. While that may work for getting some to engage, it’s not the type of thing that’ll work for the vast majority of businesses. If you’re looking for meaningless engagements, they may be an option but they aren’t relevant for most of us.

The second tactic to his growth is through paid page Likes. This can definitely bring about relevant followers but once again he goes about it in a way that will be of little value for most businesses. The author targets those in India, Brazil, and other emerging markets where the cost per acquisition is just a couple cents. For a couple thousand dollars, anyone can buy a million followers in those markets.

The problem is that most businesses aren’t looking to target people in emerging markets. People in Brazil and India aren’t their potential customers, so having a following built entirely of people from these countries would be completely worthless to them. There’s a reason the cost-per-acquisition is higher for followers in the US, Canada, and Europe. It’s because those are the markets most businesses highly desire followers from.

Can the tactics suggested be used to build one million followers with ease? Certainly. Can they be used to build high-quality, engaged, and relevant followings for most businesses? Not a chance.

It’s Not Your System

Throughout much of the book, the author frequently refers to how you can “use his system”. What system is this that he claims to have developed all by himself? It’s what the rest of us know as A/B Testing.

That’s right, it would seem he believes that art of testing two or more variables in marketing copy is something that he created. Forget the fact that A/B testing has existed before digital marketing did, or even the author himself.

The book features a number of interviews but they often seem irrelevant. Off-topic and missing the meat, these interviews fail to add much in the way of actionable insight for anyone looking to engage their audiences and grow them.

Either the author failed to make the intention of the interviews clear or failed to keep them on-topic to remain relevant to the purpose of his publication.

In addition to bad advice for building a quality social media following, One Million Followers ignores many opportunities. Brendan Kane writes off many other social networks as not worthy of investment.

As countless businesses have shown by their continued investment in social networks like Twitter, Instagram, LinkedIn, Pinterest, Snapchat, and others, it’s clear that they find numerous other networks to be viable spaces to play. It would seem that Kane’s method of building low-quality social followings with little investment may not work as well on other sites, so he simply pans them as irrelevant.

While he may not deem these social sites worth investment, you certainly should (the companies he’s worked with certainly continue to invest in those networks too). Again it would seem clear that you shouldn’t do as he says.

There are many ways to approach growing a social media following. But there are also right and wrong ways of doing so. The advice filling the pages of One Million Followers is a recipe for failure. While it can certainly allow you to grow your following fast, it will result in a following filled with irrelevant and un-engaged followers, worthless for your uses.

As someone who has helped brands, such as one of the largest tech companies in the world, build million plus follower social channels, I can’t stress enough that the tactics for growth suggested in this book are filled with flaws. If you’re going to invest in growing your following, please do so through proper means. It may require a larger investment but the return will be far and away better. You get back what you put in.